Clientarea
en
Home
In this article

How to configure & use Varnish Cache Server on CentOS 7

Varnish is an open source web accelerator software for websites and APIs. Varnish is very fast in serving requests as it caches the content into system memory and serves directly from there. As the disk is not involved in the process, it increases the performance by 300+ times. Varnish is meant to be installed as a reverse proxy in front of any web server running on HTTP. Varnish has its own configuration language to write policies on incoming requests such as back-end servers, ACLs, responses, etc.

In this tutorial, we will install Varnish 6.2 on CentOS 7. We will set up Apache as back-end server, listening on port 8080 and Varnish listening on default HTTP port 80. We will also set up Nginx listening on port 443 for SSL terminations. Varnish does not support SSL connections hence Nginx will work as an SSL reverse proxy for Varnish.

Update the system with the latest packages and security patches using these commands.

Varnish can be installed using many methods such as installing the RPM package from EPEL or compiling from source. In this tutorial, we will use package cloud repo for installing Varnish as it has the latest version of the application and it is maintained regularly by application authors. To make sure we install only authenticated package, install PyGPGME.

Also, install the EPEL repository as some dependencies are only available there.

After a successful installation, you can check the Varnish cache server version by running the command.

You should see a similar output.

Varnish is now installed on your server. Let’s go ahead and put it to use.

To test our Varnish setup, lets Install Apache Web server on the same server. We will put Varnish as reverse proxy listening on port 80 and Apache listening on port 8080. Whenever a request for a web-page will come on Port 80, if the resource is available in the cache, Varnish will serve that directly from memory. If not, it will forward the request to the back-end server, in our case Apache on port 8080.

Find the line number 42 saying Listen 80 and change the port number to 8080 as shown below.

Restart Apache web server so that the changes can take effect.

You can also enable Apache to automatically start at boot time by running. 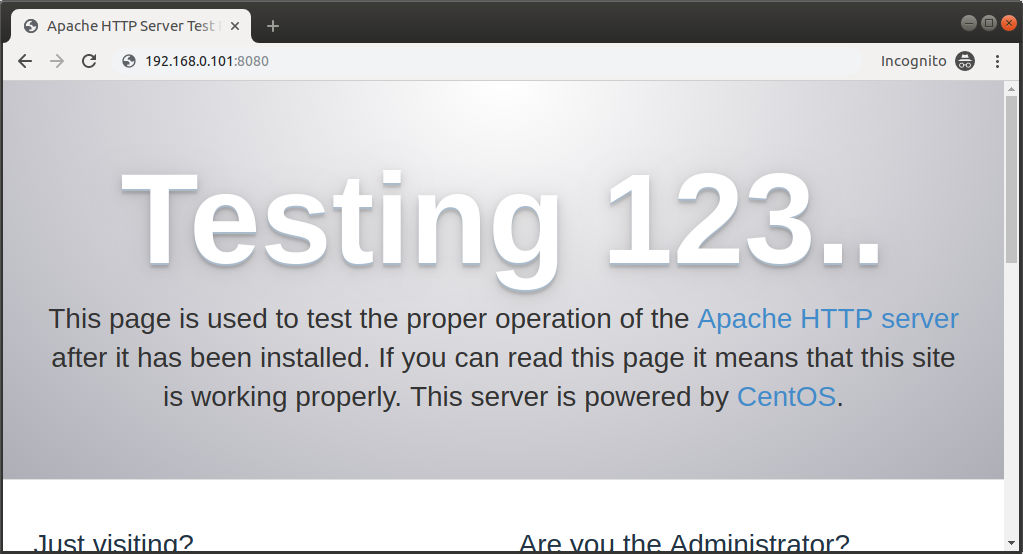 Once you are done testing that Apache is working, let’s close the port 8080 as it is not recommended to expose unnecessary ports on the internet.

By default, Varnish is configured to listen on port 6081. Let’s change it port 80 as port 80 is the default HTTP port. Edit the Varnish Systemd service file.

If you have spare memory in your server, you can also increase the maximum amount of memory allowed to Varnish for caching by increasing 256m. Save the file and exit from the editor.

Have the look at the configuration shown below.

The default back-end is listening on port 8080 on localhost. Exit from the editor without making any changes.

Once done, restart Varnish and enable it to automatically start at boot time.

Now if you go to http://192.168.0.101, you will see the same default HTTP web-page. To confirm that if it has been sent using Varnish, run the following command into the terminal.

You will see the following output.

Notice the X-Varnish and Via parameters. It tells us the web-page is indeed sent using Varnish. We received a 403 response code as we do not have any webpage at /var/www/html/directory.

Since Varnish does not support SSL, we need to use some other web server to listen for SSL connections. In this tutorial, we will use Nginx to handle SSL connections on port 443.

As we have already installed the EPEL repository, we can install Certbot directly using the command.

Certbot is a very popular client to generate Let’s Encrypt certificates. By default, Apache is configured to serve the website located at the directory /var/www/html. We will use this location as our webroot directory to generate the certificates. If you have your website installed in any other location, replace /var/www/html with the actual path of your website’s webroot.

Note: The domain which you are using must be pointed towards your Snel server. Let’s Encrypt will verify it before issuing the certificates.

The command will ask you for your email address for renewal notices. It will also prompt for accepting terms and conditions. Once certificates have been obtained, the private key will be stored at /etc/letsencrypt/live/example.com/privkey.pem and the full certificate chain will be stored at /etc/letsencrypt/live/example.com/fullchain.pem.

Put the following line into the editor.

Now that we have generated the certificates, let’s configure Nginx.

Open the default Nginx configuration file by running the command.

Save the file and exit from the editor. Restart all Web Server related services so that our changes can take effect.

You can test if SSL is working on your site by browsing to https://example.com/ from any web browser. If you would like to confirm if the webpage is indeed sent via Varnish, run this command on a terminal.

You should see a similar output. Notice the X-Varnish and Via parameters. It tells us the web-page is indeed sent using Varnish.

In this tutorial, we have learned how to install Varnish cache server on CentOS 7. We have also installed Apache as the back-end to Varnish server. We configured Varnish to listen on port 80 as the default web server. We also activated SSL on our website using Let’s Encrypt and Nginx reverse proxy listening on port 443.